Duane Hanson at the Serpentine

The 1805 Magazine building (an armoury and gunpowder store) in London’s Kensington Gardens was sensitively converted by Zaha Hadid and Liam O’Connor Architects in 2013 into the new Sackler extension of the Serpentine Gallery, with a swooping tent-like addition in fabric and glass by Hadid enclosing a new restaurant. The gallery is currently exhibiting work by the US sculptor Duane Hanson (1925-1996), who created astonishingly lifelike figures and tableaux of working-class Americans (exhibition closes 13th September).

Very well laid out, not too crowded with exhibits, you can get up close to each sculpture to examine their incredible detail. They are life-size and technically astonishing, made from a variety of materials including epoxy resin (car body filler), fibreglass, painted bronze, real hair, clothes and accessories. Their ‘skin’ has wrinkles, age spots, small cuts, moles, hair, stubble, and sweat. In fact they are so lifelike that staring at them becomes slightly uncomfortable and voyeuristic after a while as you half expect them to turn and curse you for being so rude. You also end up staring at the gallery staff wondering if they are exhibits as well! Hanson actually created Security Guard in 1990 which disconcerts visitors to the Boca Raton Museum of Art where the sculpture stands next to its security office.

However, what lifts them far beyond a Madame Tussauds style wax-works exhibit and makes them works of art is the extraordinary way these static figures can convey deep emotions. You can feel their despair, disappointment, loneliness, bitterness, or boredom, and some of the figures are weighed down with the effort of day-to-day life, especially the Man with Hand Cart who has just had enough of his tiring work. The ones doing monotonous jobs stare into the distance, their minds elsewhere. Look at the (not so) Old Couple on a Bench, married so long they have nothing left to say to each other, lost in their own thoughts of what might have been perhaps.

A figurative painter until he was 40 Hanson started making socially critical sculptures in the mid 1960s depicting police brutality, abortion, soldiers in Vietnam, and homeless people. One of these earlier pieces in the exhibition is quite shocking, depicting a dead baby with a plastic bag over its head in a dustbin (Trash 1967). He moved on to create sculptures of working-class Americans, brilliantly capturing the details of the lives and tastes of this artistically ignored section of US society. He is never patronising, a sympathetic observer as you can see from his witty Self Portrait with Model with the artist thoughtfully sitting opposite one of his subjects. He explained why he chose this area of human life for his art:

“The subject matter that I like best deals with the familiar lower and middle class American types of today. To me, the resignation, emptiness and loneliness of their existence capture the true reality of life for these people.”

Self Portrait with Model 1979 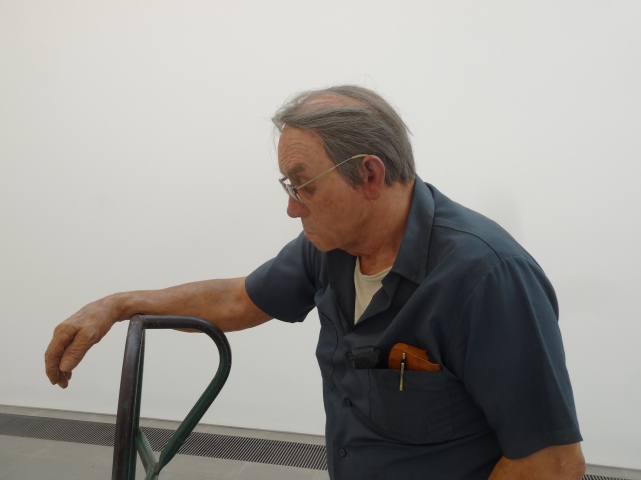 Above: detail of Man with Hand Cart 1995

All photographs by me